Five million babies have now been born by IVF - and HALF since 2007, new figures confirm


Five million babies have now been born worldwide with the help of fertility treatment - half of them in the last six years.
The first ‘test tube baby’, Louise Brown, was born in 1978 and by 1990 there had been an estimated 90,000 births resulting from assisted reproductive technology (ART) worldwide.
By 2000, the figure stood at an estimated 900,000. 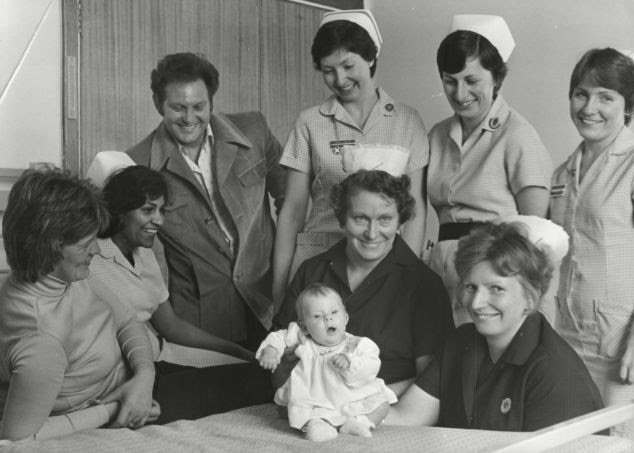 The first 'test tube baby', Louise Brown, was born in July 1978 at Oldham General Hospital. She is pictured with her parents and the nurses who cared for her
Since 2000, the number of births resulting from fertility treatment has rocketed and by 2007 it was estimated that more than 2.5 million children had been born using assisted reproductive technology.
Since 2007, it is believed that about 2.5 million babies have been born following fertility treatment,  bringing the total to date to about five million, according to a report by the International Committee for the Monitoring of Assisted Reproductive Technology.
Richard Kennedy, from the International Federation of Fertility Societies said: ‘This comprehensive report confirms that we now have over five million babies born through assisted reproduction.

‘More than that, it shows that half of them have been born in the last six years.
‘The number of babies born through ART is now about the same as the population of a U.S. state such as Colorado, or a country such as Lebanon or Ireland. This is a great medical success story.’
IVF was pioneered by Sir Robert Edwards, who died earlier this year, and by Dr Patrick Steptoe. Since 2007, about 2.5 million 'test tube babies' have been born. Louise Brown (right with her son, Cameron) is pictured with Sir Robert Edwards, one of the pioneers of IVF, and her mother, Lesley Brown
Their technique led to the birth of Louise Brown on July 25, 1978, at Oldham General Hospital.
The treatment involved an egg being removed from one of her mother’s ovaries with a probe before being mixed with her father’s sperm in a petri dish – not a test tube.
The resulting embryo was implanted in Mrs Brown’s womb two days later.
Mrs Brown was not the first woman to become pregnant after IVF treatment, but none of the previous pregnancies had lasted for more than a few weeks.
Now, about 180,000 IVF babies are born in Britain each year.
Following each cycle of IVF, a woman under the age of 35 has a 32 per cent chance of conceiving, a 35 to 37-year-old has a 28 per cent chance, a 38 to 39-year-old has a 21 per cent chance and a 40 to 42-year-old has a 14 per cent chance.

WHAT IS IVF TREATMENT AND HOW DOES IT WORK?

In vitro fertilisation (IVF) is one of several techniques available to help couples with fertility problems to have a baby.
During IVF, an egg is surgically removed from the woman's ovaries and fertilised with sperm in a laboratory. The fertilised egg, now called an embryo, is then returned to the woman's womb to grow and develop.
An IVF cycle starts with a woman being given drugs to suppress her menstrual cycle.
Once this has happened, she is given a fertility hormone called FSH which increases the number of eggs the ovaries produce.
The eggs will then be collected by using a needle to remove them from the ovaries.
The eggs are then mixed with sperm in a laboratory and any fertilised eggs are left for a few days before being transferred into the womb.
Currently, women under 40 are offered three cycles of IVF treatment on the NHS if they have been trying to get pregnant for more than two years or if they have not been able to get pregnant after 12 cycles of artificial insemination.
Women aged between 40 and 42 are offered one cycle of IVF on the NHS if they have been trying for a baby for two years, if they have never had IVF before, if they show no evidence of low ovarian reserve and if they have been informed of the risks of IVF and pregnancy at their age.
Following each cycle of IVF, a woman under the age of 35 has a 32 per cent chance of conceiving, a 35 to 37-year-old has a 28 per cent chance, a 38 to 39-year-old has a 21 per cent chance and a 40 to 42-year-old has a 14 per cent chance.

Change Your Address in 3 Easy Steps

DEAL OF THE DAY